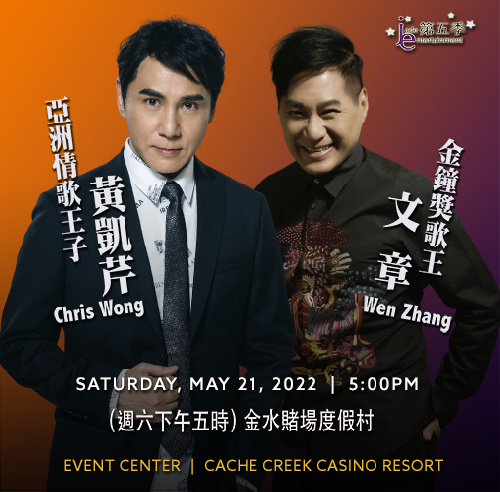 Chris Wong & Wen Zhang
CHRISTOPHER WONG
Famous Hong Kong singer-songwriter, Christopher Wong is praised by his fans as the "Prince of Love Songs". He has written countless classic songs, most known for "Late Autumn", "Encounter Again" and "Love Is Not Yet". He signed with Polygram Records (now Universal Music) in 1987, with the release of his first album "Moody" and its hit single "Encounter." Throughout his music career, he maintained his work as a DJ and writer, hosting radio programs such as "The World of Two" and "Night Love."  He currently works both in Canada and in Asia.

WEN ZHANG
Wen Zhang is widely known as the "Triple Golden King"— the only vocalist to have received the Golden Bell Award, Golden Melody Award, and the Golden Voice Award. His illustrious career began in 1984, when he released his first album "365 Miles Road." The album reached number one on the Taiwan billboard charts and earned him the title of Best Newcomer with the Golden Voice Awards. Wen Zhang' career reached a peak in the 1990's, and his music continues to resonate in hearts of Chinese people deeply and thoroughly today.
Chris Wong & Wen Zhang Add to my Calendar Buy Tickets